1) Grease a 2 litre (8 cup) pudding basin and lid. Line the base of pudding basin with baking paper. Spoon ½ cup of the Buderim Ginger Original Marmalade into base of the pudding basin.

2) Using electric beaters, beat butter and sugar until thick and pale. Add eggs one at a time beating well after each edition. Beat in vanilla and remaining Buderim Ginger Original Marmalade.

3) Stir in flour and milk until combined. Spoon mixture into pudding basin and cover with greased lid or if it does not have a lid greased foil secured with kitchen string.

4) Place pudding in a large saucepan (stockpot) and pour enough boiling water to come ¾ cup side of the pudding. Cover with pot lid and place over a medium heat to steam the pudding for 2 hours. Check the water level occasionally and top up when necessary.

5) Invert pudding onto a serving plate and serve with custard or yoghurt.

Tip: For extra zing add the zest of an orange or lemon in step 2. 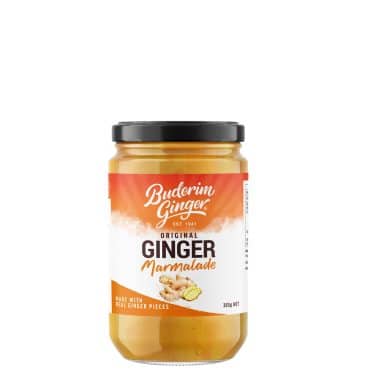